For about a week in the winter of 2013, I was in Papenburg, Germany for business. I was visiting the Meyer Werft shipyards, where hardworking Germans craft the colossal passenger ships for Norwegian Cruise Lines (NCL). They really pack the technology into those ships, and I was there representing a software company that had a product to power digital signage. I remember that this ship had over 40 digital signage screens spread across its 14 decks, and we spent a couple of days shuffling and reshuffling Mac Minis.

Flying Down From Manchester, UK

I had been living in Manchester, UK for about 8 months and was called in on short notice to help get the digital signage in order before the unveiling of the latest NCL ship. The move to Manchester had been a challenging move for me, all the more so because of the weather. Like Manchester on most days, I remember Papenburg being overcast most of the week, and there was snow on the ground. During an evening that week – probably while drinking a Warsteiner beer at Papenburg’s Jameson’s Pub (funny how even the Germans have imported Irish pubs) – I read a blog post by Michael Hyatt, one of my favorite leadership and management writers. The post was titled “How to Create More Margin in Your Life”, and after reading it, I remember really committing myself to the concept. The name and the mantra of “creating margin” stuck with me.

Less than a year later- in January 2014- I was back in sunny Denver and starting a company. We would specialize in Digital Signage services and in particular two under-served areas – content creation and managed services. I hadn’t lost sight of my overall career and life goal, and so I decided to name the company “Creating Margin”. I’m thankful for the opportunity to continue to grow this company, while always remembering the spirit of the commitment – to search out and specialize in areas of our industry that customers can’t seem to find help with and to make time for what matters most both personally and professionally, for myself, my family, and my team.

Thanks for visiting! All the best-
Matt Krebs, Founder 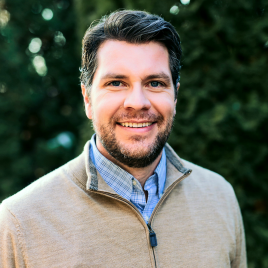 Matthew is the Founder and President of Creating Margin Corporation, a company he started in 2014 in a detached garage in Denver, Colorado. CM is a technology company specializing in digital signage content creation, training, and development. Matt founded Fresh Clothes LLC- a laundry services company with a proprietary software which allows competitive advantages in pickup and delivery- in 2020. Learn more about Fresh Clothes (including Franchise Opportunities) at www.freshclothes.app.